By Pieter Greeff, Board Member SDBF

After reading Kyle Campbell’s article on beach nourishment in Quogue, I thought it germane to contribute a longer term observational viewpoint. I reside in a beach house that my parents built in Quogue in 1937. Indeed it was from there that I was evacuated by my mother during the eye of the 1938 hurricane before the cottage next door was destroyed by the tidal wave.

Quogue is a very unique situation, along with East Quogue and Hampton Bays, being west of the Shinnecock Inlet. For 75 years our tax dollars, along with everyone else’s, have been keeping the Inlet open as well as repairing it, extending it and dredging it to effect that its jetties have diverted the East to West “littoral drift” sand flow that naturally should have accrued to our beaches had Nature been allowed to take its course. This sand has been diverted miles offshore, not to return to our protective barrier beach.

The Little Pike Inlet break of 1993, whereupon 124 houses were lost, tax revenues escrowed to the severe detriment of Westhampton Beach and a huge settlement with the U.S. government plus the formation of Westhampton Dunes stands as example to what a dangerous affair a breakthrough can be. Albeit the LP Inlet was before a bay, such an event in Quogue would invade the village with a torrential rush of water over flat land.

In the times of Mayors Harvey Cooley, Malcolm McLean and other old timers any break or weakening of the dunes was immediately repaired by the village.

Now restrictive State regulations have greatly reduced the scope of protective dune maintenance even as the inexorable reduction of both beach and dunes has eliminated the three great, high dunes, hundreds of feet in breadth, extant in years past, to one low vestigial dune in the Eastern sector of Quogue Village which was twice breached by hurricane Sandy last year.

That dune maintenance and enhancement should be out of hand rejected is irresponsible, in my opinion, especially since dredging would return to Quogue its share of the lost littoral drift diverted by the Shinnecock Inlet. We are not New Jersey but a unique regional situation severely influenced by a man maintained inlet which is necessary to the community as an ocean transit for sport and commerce.

Having been a surfer myself since 1965 and an ocean Hobiecatter I can attest that good breaks come and go with the seasonal and storm shaped meanderings of the near and far bars and that other breaks can always be found. Some of the best are due to jetties, groins and bar replenishments due to bay dredging. The notion that offshore dredging destroys bars for surfing is simply not the case.

The reality that the next hurricane or severe nor’easter could possibly destroy Quogue is not so outlandish with our Eastern dunes being the lowest and least effective in living memory.

A BEACH RECLAIMED; WHAT I SAW IN MIAMI

By Marjorie Kuhn, Board Member SDBF

I nearly fell off my seat at the CCQ meeting in Quogue (8/24) when guest lecturer Dr. Young spoke of Miami Beach as being the poster child for beach nourishment. You see, I grew up in Miami Beach and remember standing on the beach in the dark of night watching in awe as sand and shells spewed forth from the pipes bringing much needed nourishment to the sand-deprived beaches of Miami Beach. That was the late 1970’s and clearly much has changed in how today’s beach nourishment programs are implemented.I was especially convinced by Dr. Young’s insistence that we could cope with rising sea levels and storms and that good coastal management therefore requires “long term planning, long term thinking and community level action.”

It is surely time for us to come together and make beach nourishment a reality in Quogue.

I’ve been a beach watcher since I was a little kid; I respect the ocean’s power, and realize that whatever is done to shore up our shore lines, must be undertaken in a mindful way. As discussion wages on as to whether the barrier beach should be nourished, and how that should be financed, I think of the wise and eloquent perception 16th century English poet, John Donne: “No man is an island, entire of itself, Every man is a piece of the continent, A part of the main…”

I urge my neighbors to look not only at Quogue’s 2.7 mile stretch of sand, but to consider the spit of land from the eastern inlet Shinnecock to the western Moriches Inlet. Not only are we part of the continent, the main, but if the barrier beach goes, then so goes the mainland. We simply have to figure out how to work together so that a beach nourishment program becomes reality in Quogue – and soon.

No longer can a dredge park offshore in a convenient spot and spew sand onto the beach. Now, borrow areas must be qualified, tested and meet a strict laundry list of criteria before it can even be considered. Testing, environmental impact studies, and many many borings are delicately lifted from the ocean bottom, and then if all passes muster, a nourishment program can follow. But, I get ahead of myself. There are bureaucratic procedures to heed, permits to obtain and community agreement on a financial model for funding. The history is hardly encouraging.

By Pieter Greeff, Board Member, SDBF

Quogue’s erosion is exacerbated by the on going tax-supported maintenance of the Shinnecock inlet which for 75 years has rerouted the sand that Nature would normally provide our protective barrier beach offshore and its natural capture of Littoral Drift. We are  not likely to see the inlet closed, as it should have been, or any disruprtive jetty shortened, but we can get back our lost sand through dredging offshore,.Financing that is a sound investment. As Southampton Town Supervisor Anna Throne-Holst noted, Southampton’s has acted to protect $8.1 billon of assessed beachfront value. Values in Quogue would greatly increased if we had the dunes that were here in 1950. We should surely have a fair share of the recent $700 million in funding from the federal government for post-Sandy restoration to enable us  to achieve the “soft” solution favored among all others by the scientific experts.

As to the specifics of a scheme financed by tax valuation, the Southampton office of Supervisor Ann Throne-Holst would be preferable to any recollections. Her email: athrone-holst@southamptontownny.gov. 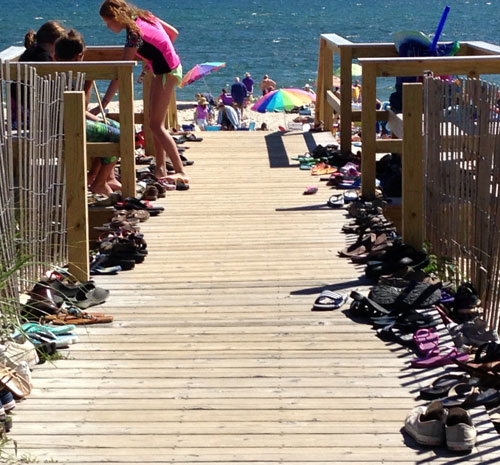 What we are protecting: Quogue’s most valuable asset.
A STITCH IN TIME?

By Marjorie Kuhn, Board Member SDBF

If the lessons of the past aren’t learned, they’re bound to be repeated. Beach renourishment is not a new idea. It is tried and true, and has been approved and executed by coastal neighbors east and west of us, as well as up and down the East Coast. Supported by years and volumes of scientific and environmental research, beach renourishment has the approval of all the necessary government agencies.

West Hampton Dunes was borne out of a crisis caused by a groin field that substantially increased erosion far beyond the normal rate of one and half feet a year to over fifteen feet a year. Couple that with a strong cycle of nasty storms, and you’ve got a recipe for disaster. [The Mayor of the WH Dunes tells the story on an adjoining page.]

Must the same fate befall Quogue? This past fall and winter, the East Coast, especially the northeast, was battered by decade’s worth of storms in two seasons. While for the most part, Superstorm Sandy spared our homes, the dunes west of Shinnecock Inlet in Hampton Bays and East Quogue were completely flattened and the island almost breached. In the most at risk & endangered area of the Quogue coastline, Sandy left behind one devastated home, sheared off dunes, and a lot of questions. So now what?

Our neighbors to the east in Sagaponack and Bridgehampton have already recognized the value of the beach to their whole communities. They have approved and are starting a beach restoration project this Fall. Quogue should do the same. Because if we don’t act now, we will merely be repeating the same mistake of West Hampton Dunes over two decades.

For the last sixty years, the waves of erosion created by Shinnecock Inlet (almost six miles to the east of the Village) have devastated Hampton Bays and East Quogue. In the last twenty years nothing has been done about the inlet and its interruption of the natural westerly flow of sand so has spread into the eastern beaches of the Village of Quogue like a virus. Given the prolonged inertia, it cannot fail to continue its westerly progress, destroying all the dunes quite likely breach the barrier island to menace homes inland. In short the economic viability of the entire area is at risk. Those who maintain that the accelerated erosion in Quogue is simply ‘natural forces’ are wrong and their uninformed opinion threatens the integrity of the entire barrier island.

Before it is too late, let’s take steps urgently required so that beach nourishment can become a reality in Quogue and so we will not find ourselves echoing the 1992 remark of Bill Daley of New York’s Department of Environmental Conservation: ‘There were a number of steps along the way where it all could have been avoided.

Above: Destruction of dunes slightly to west of village beach