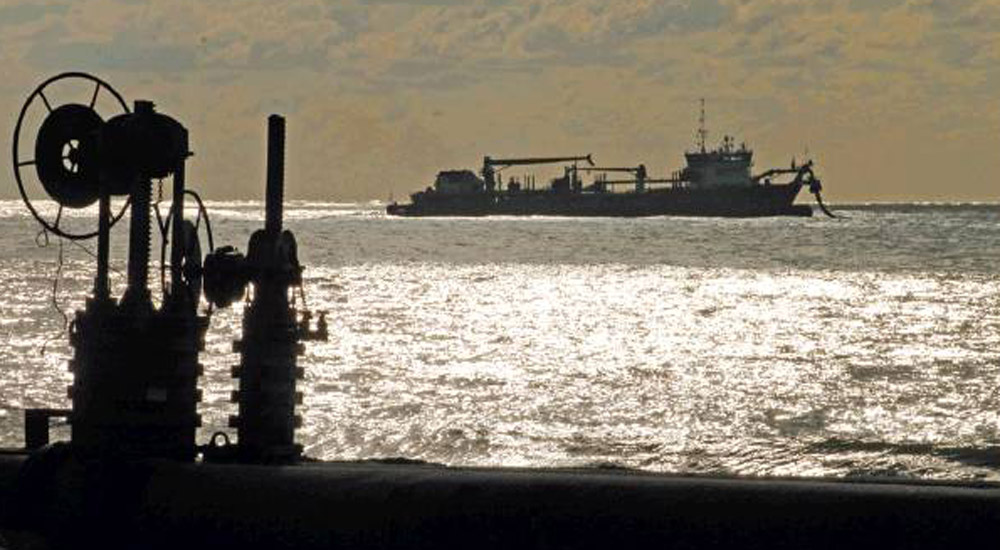 An article by Kyle Campbell in the Southampton Press covers the beach nourishment project that started last month in Westhampton Beach. A subscription is necessary to view the article on the 27east website, but we obtained permission to reprint it below.

Sand dredged from the ocean floor is pumped onto the beach just west of Jetty Four, also known as Lashley Beach, in Westhampton Beach on Monday morning. (photo: Kyle Campbell)

After more than a month of prep work, an expansive beach nourishment project got under way late last week in Westhampton Beach.

The $14.2 million project, which is being conducted by the U.S. Army Corps of Engineers and paid for by the federal government, is set to pump between 905,000 and 1.5 million cubic yards of sand from the ocean floor onto a roughly fourmile stretch of beach between the Lashley Beach Pavilion in Westhampton Beach and Cupsogue Beach County Park, just west of West Hampton Dunes Village.

Coastal geologist Aram Terchunian, founder of Westhampton Beach-based First Coastal Corporation and a consultant for the project, said the dredging began on Friday, had to shut down because of bad weather on Saturday, and then picked up once again on Sunday.

Sand is collected by the dredge, pumped through a submerged line near the shore and then through a series of pipes on the beach before being blasted out and redistributed along the beach by front-end loaders. Weather permitting, pumping will take place 24 hours a day, seven days a week. Officials are estimating that the work should take less than two months to complete, or between 40 and 55 “pump days.”

Beach access was restricted at Lashley Beach on Monday morning and it will remain blocked during this first leg of the project. The closure has drawn criticism of surfers and other beachgoers who frequent the beach and maintain that they are entitled to continue accessing it during the work.

The issue was brought up during Monday’s Southampton Town Trustees meeting, with attendees pointing out that the Trustees demanded a path to the water during a separate beach nourishment project in Sagaponack Village and Bridgehampton that wrapped up earlier this year.

“In [Sagaponack], you had a very wide beach and very narrow dune,” Trustee Ray Overton said. “Down there [in West Hampton Dunes], it’s the opposite. You have a very wide dune system and a narrow beach. There isn’t a lot of options for letting traffic go by.”

Westhampton Beach Mayor Maria Moore said the issue was raised with the village’s police department this past weekend by “insistent surfers,” but ultimately she made the decision to close Lashley down this week, citing safety concerns. She said she’s hopeful that the work will be able to move farther west by next week.

“We made the determination to close the parking lot for this week because, at this point, with all the heavy equipment and machinery there this week, it would be an unsafe condition for anyone to be there other than the contractors,” she said on Monday afternoon. “By the end of the week they’ll have moved further west and it shouldn’t be an issue.”

“We’re estimating 40 pump days for the overall project,” Mr. Terchunian said Monday morning. “If they have weather like this, it’ll go pretty quick.”

The stretch of beach, which includes parts in Westhampton Beach and West Hampton Dunes villages, as well as the hamlet of Westhampton, is regularly serviced by the Army Corps of Engineers because of a settlement between the federal government and West Hampton Dunes that was reached after the village sued the federal government in 1993. The basis of that suit charged that the federally constructed jetties to the east prevent sand from flowing to the west and naturally rebuilding the shoreline.

This particular nourishment project will be covered under the Disaster Relief Appropriations Act of 2013, which was passed in response to damage caused by Hurricane Sandy in 2012. 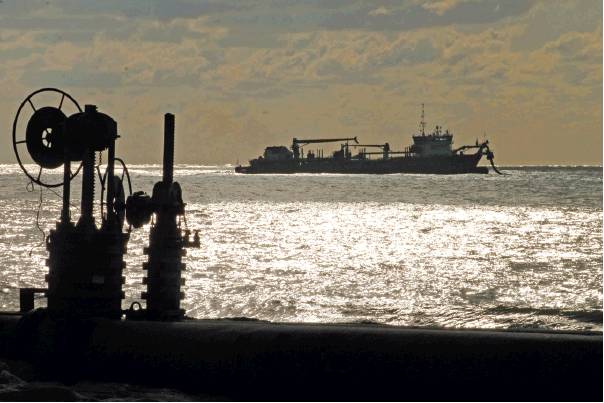