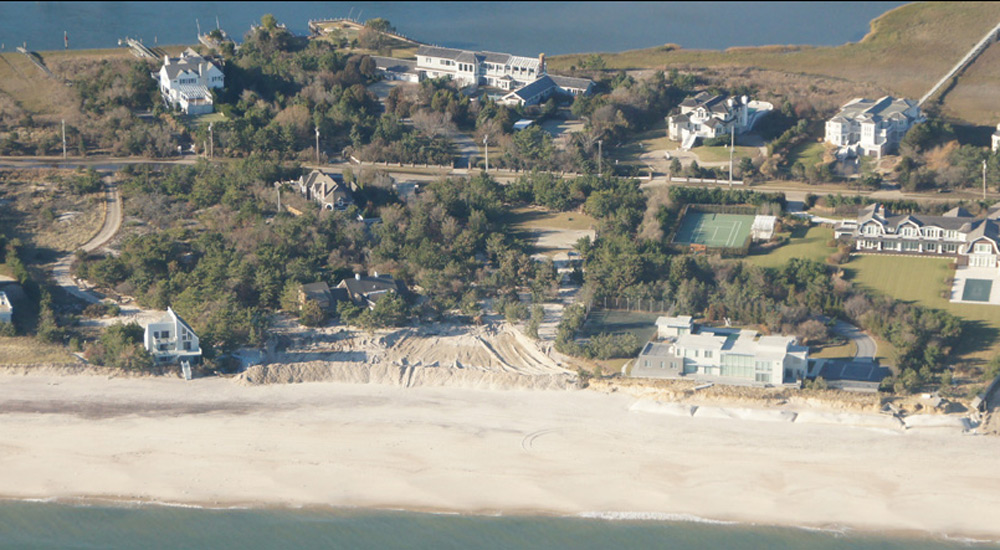 The October 2014 edition of The Quogue Village Voice contains a comprehensive update on the position on beach nourishment held by the Mayor and Village Trustees. Included in the update are the takeaways based on our Summer Seashell Speaker Series.

Beach Nourishment-What Have We Learned and Where Are We Now?

In 2010, in the aftermath of a very damaging nor’easter in November 2009 that, among other things, took out the dune at the Village Beach Facility and destroyed a large portion of the improvements there, the Board of Trustees decided to seek permits to undertake a beach nourishment project in the Village. Beach nourishment entails pumping large volumes of sand (approximately 1.1 million cubic yards in the case of a project in Quogue) from a borrow site about a mile offshore onto the shoreline to create a wider, better-configured beach. The Save the Dunes and Beaches Foundation agreed to pay the cost of the permitting process, estimated at the time at $100,000: The accompanying agreement explicitly states that there was no commitment on the part of the Village to undertake a nourishment project, and there has been no subsequent determination on the part of the Village to do so. The publication of notice by the DEC of the completion of the application generated a letter-writing campaign by many Quogue residents against the issuance of the permit. To date the necessary permits have not been issued.

This past summer there were three informative programs in the Village that addressed the subject of beach nourishment. In June, the Save the Dunes and Beaches Foundation sponsored Jay Tanski, a Coastal Processes and Facilities Specialist based in Stony Brook with New York Sea Grant, a cooperative program of the State University of New York and Cornell University, and author of “Long Island’s Dynamic South Shore: a Primer on the Forces and Trends Shaping our Coast,” and Dr. David Basco, a professor and the Director of the Coastal Engineering Center at Old Dominion University in Norfolk, Virginia. In August, the Concerned Citizens of Quogue sponsored Cornelia Dean as a speaker in a program moderated by Dr. Rob Young. Ms. Dean is a science writer for The New York Times and lecturer at Harvard University. She is the author of the 1999 book “Against the Tides: The Battle for America’s Beaches” and recently (September 29) wrote an article in the Times entitled “Growing, and Growing Vulnerable : Barrier Islands feeling the Effects of Climate Change.” Dr. Young is a Professor of Coastal Geology and the Director of the Program for the Study of Developed Shorelines at Western Carolina University and a frequent writer on the subject of coastal management and mis-management. A recent (August 22) article by him in The New York Times criticized a proposed project to pump sand on the beaches of Fire Island, calling it a “colossal waste of money.” Lastly, the Save the Dunes and Beaches Foundation sponsored a program later in August that addressed the historical beach erosion in our area, existing beach conditions and some of the science of beach dynamics. The program also had a segment on the cost of a project and how it might be financed. Featured speakers were Aram Terchunian of First Coastal Corporation in Westhampton Beach, who has been in charge of the permit application process for the Village and also involved in many nourishment projects in Long Island, including those in New York City, Westhampton Dunes and Sagaponack/Bridgehampton, and Noah Nadelson of Munistat Services, Inc., an expert in municipal finance and financial advisor to many municipalities in Long Island in connection with their bond issues. The following are the principal takeaways of the Mayor and Trustees based on these sessions and other available information.

The issue of beach nourishment is complicated and important-both as to whether it should be undertaken and, if so, the allocation of costs. Public input is vital, of course, and ultimately a project must have broad public support in order to proceed. If and when the DEC permit is issued, we intend to hold informal sessions at which views can be expressed. These meetings will be in addition to whatever formal hearings that may be required.